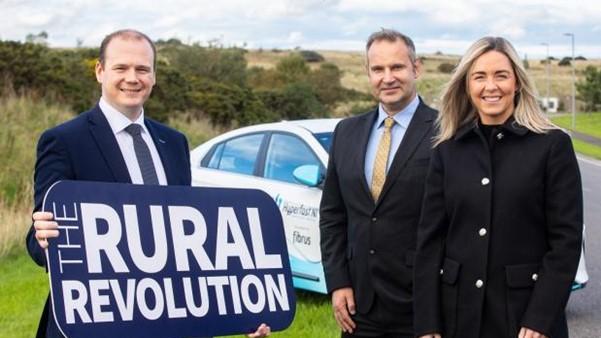 Over half of the 85,000 premises scheduled for improved connectivity under Project Stratum now have access to gigabit-capable broadband.

Public funding totaling £197m has been allocated to Project Stratum from the confidence and supply agreement, The DCMS, the Department of Agriculture, Environment and Rural Affairs and DfE.

Fibrus Networks has been delivering the contract and now directly employs 320 people, with another 400 indirectly employed via build partner Viberoptix who subcontract a further 500.

Minister Gordon Lyons said: “Project Stratum is one of the most important major infrastructure projects that Northern Ireland has ever seen.

“The 85,000 premises set to benefit from this much-needed public intervention will help to close a broadband connectivity gap that has existed in Northern Ireland compared with other parts of the UK at superfast levels.”

The rollout of Project Stratum is continuing, and Fibrus Networks are on-track to reach all 85,000 premises that form the contract by March 2025.

Zzoomm’s fibre network has passed 100,000 ready for service properties across 29 locations in its latest milestone.

Quickline has added 20 communities to its rollout in the last eight months, with its network now passing 10,000 homes and businesses across North Yorkshire and Lincolnshire.

Vfast Internet, part of Orbital Group has signed up its 15,000th customer. MD Rebecca Brown attributes the growth to partnerships with OFNL and CityFibre.

Openreach has now made fibre available to more than 100,000 homes and businesses across Suffolk as part of its £30m county-wide investment.

KCOM has begun work to connect 360 properties in Gunness, Lincolnshire, to its full fibre network.

Half of London homes have fibre access, says Mayor

Fibre connectivity is now available to 50 per cent of Londoners, up from four per cent in 2017, according to the Mayor.

Lightning Fibre has raised £2,185 for Wayfinder Woman Trust which runs a drop-in centre and safe-space for women at its Eastbourne location.

Openreach is trialling a set of service management measures in Salisbury and Mildenhall to encourage customers using analogue phone lines to switch to new, digital alternatives.

Airband passes another 1,700 premises for CDS

Airband has made fibre accessible to another 1,700 homes and businesses as part of the Connecting Devon and Somerset (CDS) programme.

CityFibre added over one million ready for service (RFS) homes to its network in 2022, a 40% increase from last year.

Recessionary shocks will lead to investment cooling off in 2023 and catalyse a frenzy of M&A activity in the altnet community, according to analysts and market watchers cited by ThinkCX.